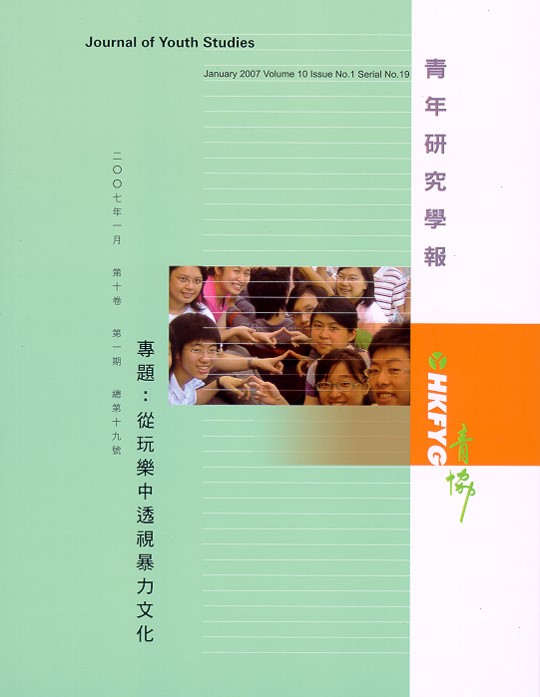 [Abstract] To understand the school bullying problem, one needs to deconstruct the relationship between "bully" and "aggression." This paper argues that "proactive aggressors" are the true bullies, but very often it is not easy to identify them. "Reactive aggressors," who are often identified by teachers and social workers as bullies, are in fact victims. Their aggressive behaviours are mainly learnt from their past experiences of being bullied. In this article, these two types of aggression are discussed in order to develop more effective intervention strategies for tackling the bullying problem in Hong Kong.
Youth Violence in Tin Shui Wai in Hong Kong - CHU Yiu Kong
CHU Yiu Kong
Assistant Professor, Department of Sociology, The University of Hong Kong

[Abstract] Assault and wounding are two major juvenile violent behaviours in Tin Shui Wai. More serious violent crimes such as murder and rape have not been found to occur. Juvenile gangs exist in Tin Shui Wai. They usually use minimal collective violence against their victims for the purposes of bullying, extortion, and revenge. Gang fights for territory are not common in the district. Juvenile gangs seldom use excessive collective violence to punish their own members who violate the rules of the gang.
A Criminal Psychological Perspective to Understanding Violent Games - LO Che Wah
LO Che Wah
Registered Clinical and Educational Psychologist
Member, The Hong Kong Psychological Society
Member, American Psychological Association

[Abstract] Violent games are beginning to cause serious problems among teenagers in Hong Kong. Why do they like such games? The most dangerous problems are both the potential hazards and the consequences of violent games, which may traumatize both victims and offenders mentally and physically. This article applies psychosocial surgery to the problem from a criminal psychological standpoint in order to understand the causes and desires associated with such games. Initial assessment and preventive measures for such problems are also suggested.
Is it Just Playing? A Brief Discussion on Language Violence in Campus and Its Prevention - Tommy CHOW
Tommy CHOW
Secondary School Teacher
Cultural Worker

[Abstract] Crime City was not built in a day. However, most of us overlook the importance of prevention work. Conflicts come from misunderstandings. What we can do to preserve harmony is to let our teenagers know more about the difference between "I" and "the others." According to the broken windows theory, it is only by changing the dangerous minds of potential offenders at the very first opportunity that we can stop the spread of violence.
Youth Violent Behaviours in Hong Kong: Trends and Prevention - LUK Wai Kwok
LUK Wai Kwok
Experienced Youth Outreaching Social Worker, The Hong Kong Federation of Youth Groups

[Abstract] Cases relating to youth violence have been reported frequently in recent years both in schools and in the community. The public is sufficiently alarmed to pay close attention to the problem. This article tries to examine violent youth behaviour patterns in Hong Kong in different settings and among different kinds of groups. With a better understanding of these violent behaviour patterns, it is hoped that future trends and relevant preventive strategies could be identified.
The Cultivation of a Caring and Nonviolent Growing Environment for Children - Priscilla LUI TSANG Sun Kai
Priscilla LUI TSANG Sun Kai
Director, Against Child Abuse

[Abstract] With the findings of 4 major UN/WHO studies, 4 major Hong Kong studies, and some local case illustrations, this article discusses the factors that contribute to violence against children and the community, the prevalence of violence of this kind, and its long-term impact. To put a stop to violence, this article advocates a holistic approach, from introducing legislation against corporal punishment and violent approaches to child management, to tackling the unjust system that contributes to the widening gap between rich and poor. Emphasis is put on collaborative efforts in the family, the schools, the community, and the mass media to ensure that children and parents are empowered and supported with the necessary knowledge and skills in order to actively intervene to stop violence and to serve as advocates of caring and nonviolent values and life styles.
The Prevention of Juvenile Violence through the Promotion of Mental Health and the Enhancement of Personality Development - CHAN Kwok Tung
CHAN Kwok Tung
Specialist in Psychiatry

[Abstract] This article explores the prevention of juvenile violence and deviant behaviour from the perspective of mental health. The various theories of human violence are analyzed, followed by the risk factors and preventive factors relating to adolescent violence. The importance of the promotion of mental health and the enhancement of personality development to the prevention of violent and deviant behaviour is then illustrated by the analysis of some common mental disorders and personality disorders in adolescence and early adulthood. In conclusion, the importance of school and family as starting points in the prevention of adolescent violence, especially with the collaboration of various resources in society, is discussed.
Computer Games and Youth Violence - CHAN Kit Sze
CHAN Kit Sze
Assistant Professor, Department of English Language and Literature
Associate Director, Technoscience Culture Research and Development Centre
Hong Kong Shue Yan University

[Abstract] On April 20, 1999, the Columbine High School Massacre in Colorado shocked the world. Two teenagers shot dead 12 schoolmates and a teacher before they committed suicide. Police later discovered that both of the shooters were avid players of Doom, the world’s first game involving the shooting of people. US society was then forced to debate the question: "Do computer games make our children more violent?" The situation in Hong Kong is fortunately not that worrying. Most schools are still havens for our children. However, there are also reports that teenagers spend too much time on computer games and a few of them have even lost their lives due to their addiction to playing online games. This article aims to explore whether the virtual world and the real world can easily be demarcated as 2 separate zones, and how we can appropriate computer games as educational tools.

[Abstract] Communication and information scholars point out that the value of Internet regulation and ethics is to clarify the rights of Internet users, especially the rights and protection of children on the Internet, which has become a global issue. Since the arrival of the digital era, Internet safety literacy has become necessary knowledge for modern people. This research uses a face-to-face questionnaire survey and focus group interviews to explore: (a) the Internet behaviours of teenagers and their cognition of Internet content rating; and (b) teenager’s Internet safety literacy in Taiwan and the factors that influence it. The results show that more than 40% of teenagers do not know that it is considered dangerous to make friends in Internet chatrooms, of if they do know, they disagree that it is dangerous. Teenagers who become addicted to the Internet are addicted either to online games, to Internet pornography (male), or to making friends in chatrooms (female).
The Gamer or the Game? Some Exploratory Ideas about Videogame "Addiction" - Angeline KHOO
Angeline KHOO
Associate Professor, National Institute of Education, Nanyang Technological University

[Abstract] Video games are gaining in popularity, but there are also concerns that they can be "addictive." Although there is some agreement that this problem does exist, the actual process and the causes of it are still unclear. On the one hand, there are studies that have examined the characteristics of gamers who suffer from personality deficiencies, who are vulnerable to such problems. On the other hand, more recently, with the popularity of Massively Multiplayer Online games, it has been argued that there are elements in the structure of this genre of game that do motivate and encourage gamers to spend more time and energy playing, thus contributing to their addictive tendencies. The game World of Warcraft is used as an illustration. The article provides some suggestions for future study that include both the factors that influence gamers’ playing habits as well as those within the structure of the games. It argues that although videogaming can lead to addictive tendencies in the gamer, the positive aspects of videogaming should not be forgotten. It also suggests ways in which videogame "addiction" can be prevented.
Adolescent Internet Addiction: The Phenomenon, the Underlying Factors, and a Pilot Project - NG Kam-kuen, Cecilia
NG Kam-kuen, Cecilia
Unit-in-charge, Centre for Internet Addiction, The Hong Kong Federation of Youth Groups

[Abstract] With the development of the World Wide Web, Hong Kong has turned into an enthusiastic cybercity. It is found from various local studies that the Internet plays a vital role in the daily lives of today's adolescents. It is estimated that about one fifth of adolescents are in danger of becoming addicted to the Internet. The underlying reasons for this are complex. It is believed that Internet addiction is only a behavioural symptom revealing unresolved personal, social, and psychological problems that require external assistance. In response to the problem, The Hong Kong Federation of Youth Groups is launching a two-year pilot project using a multilevel intervention model to help adolescents establish a healthy pattern of Internet use and resume a balanced life.

[Abstract] As social entities in the "third sector," public welfare organizations developed in a relatively mature civil society in the West. With a fully developed public sector and private sector, they play an important role in overcoming the functional failures of the state and the market. In the modernization process of China, which involves building democratic politics, a market economy, and an autonomous society, such public welfare organizations serve the function of solving those social problems that governments and enterprises cannot solve well. In addition, they shoulder the historical burden of advancing the modernization of the "first sector" and the “Second sector” as well as fostering the development of civil society in China.