Volume 18, Issue No. 1 (Serial No. 35) Youth and the Universal Retirement Protection Scheme: What it Means for Them? 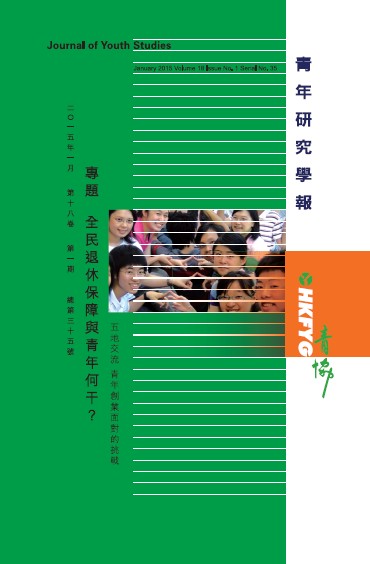 Feature: Youth and the Universal Retirement Protection Scheme: What it Means for Them?

【Abstract】This paper examines the structures of several pension systems and the worsening trend in global aging of the population. It then reviews the pension strategies adopted by some other countries to cope with the problem of the financial crisis in a “Pay as you go” system. Lastly, it considers the issues surrounding the implementation of a universal retirement protection scheme in Hong Kong.
Keywords: Pay-as-you-go system, Pension Crisis, Pension Reform, Population Ageing
Ideas Behind our Study on the Future Development of Retirement Security in Hong Kong - Nelson CHOW
Nelson CHOW
Honorary Professor, Department of Social Work and Social Administration, The University of Hong Kong

【Abstract】We submitted our report, “A study on the future development of retirement security in Hong Kong,” in August this year. It has stimulated great public concern as any future retirement security arrangement will incur expenditure of billions of dollars annually. Other than examining current social security provision for senior citizens, we have also conducted actuarial analyses of several proposals made by the political parties and other interest groups for the future development of retirement security in Hong Kong. It is clear that while people in Hong Kong are becoming more aware of their financial needs when they grow old, a financially viable and sustainable system that provides adequate financial support for the elderly has yet to be developed.
Keywords: Universal retirement protection, sustainability, fair distribution, retirement
The Objectives and Effectiveness Evaluation of Reforming Retirement Protection - Kee Lee CHOU
Kee Lee CHOU
Professor, Head of Department of Asian and Policy Studies, The Hong Kong Institute of Education

【Abstract】It is important to understand the objective of a retirement pension reform, so that we can assess whether it is necessary to implement the reform, how to implement it and evaluate its effectiveness. This study uses the micro- simulation modelling to assess 1) the impact of the implementation of Old Age Living Allowance in 2013 on the elderly poverty rate; 2) the cost-effectiveness of universal pension, an improved version of Old Age Living Allowance and Elderly Comprehensive Social Security Assistance (CSSA) Scheme on elderly poverty rate alleviation. Results indicate that an improved version of Elderly CSSA Scheme is more cost-effective among the other two reform options. It is more likely to be financial sustainable and has a greater impact on reducing elderly poverty rate.
Keywords:retirement protection reform, elderly poverty
Functions and Sustainability of a Retirement System - Hoi Wai CHUA
Hoi Wai CHUA
Chief Executive, The Hong Kong Council of Social Service

【Abstract】Many people are concerned about the financial sustainability of a universal retirement protection system, but this is a technical issue. The core functions of a society’s retirement protection system are to help its citizens pool the risks arising from longevity and provide basic income protection for its elderly members. The government could use various different systems to ensure that elderly persons in different social and economic strata are adequately protected.
Keywords: elderly, income support, longevity risk, poverty, retirement system
Is Universal Pension Sustainable? - Bauhinia Foundation Research Centre
Bauhinia Foundation Research Centre

【Abstract】Following the submission of a study report on universal retirement protection to the Commission on Poverty, there have been heated discussions about the feasibility and sustainability of its recommendations. With reference to the experiences of Japan and New Zealand, the Centre’s analysis “Is universal pension sustainable?” looks at the financing and operating models of different universal pension schemes, and compares their gains and losses. The public will need to consider how much we are willing to contribute to our retirement.
Keywords: Universal pension, sustainability, Japan, New Zealand
Universal Retirement Protection: The Relevance of MPF in the Debate - Diana CHAN
Diana CHAN
Managing Director, Mandatory Provident Fund Schemes Authority

【Abstract】The Mandatory Provident Fund (MPF) system, implemented in December 2000, is a mandatory, privately managed, defined contribution, employment-based, and fully-funded pension system. It is the second pillar of the multipillar retirement protection framework recommended by the World Bank and complements other forms of retirement protection. Since its launch, the MPF has contributed substantially to the retirement savings of Hong Kong’s working population, as evidenced by the high enrolment rate (close to 100%) and growth of MPF contributions and assets. Improvements continue to be made to the MPF. To provide better retirement protection for the Hong Kong population, it is important that the MPF retains its position as a key pillar within the framework, rather than being replaced or having its role diminished. This remains the case whether or not a universal retirement system is to be introduced.
Keywords: MPF System, World Bank, second pillar, retirement protection
The Views of the Hong Kong Youths on Retirement Protection - Shui Ching CHAN Sharon CHEUNG
Shui Ching CHAN Sharon CHEUNG
Youth Research Centre, The Hong Kong Federation of Youth Groups

【Abstract】The aging population trend in Hong Kong implies a continuous increase in the elderly dependency ratio, and an unremitting financial burden on the younger generation in terms of taking care of the elderly. It is time to address the way out of Hong Kong’s current retirement protection plan from the perspective of younger people, the major stakeholders in its future development. This article analyzes the concerns and values of young people about retirement protection, as well as what they think about the universal retirement protection plan should it be implemented in Hong Kong. The findings cited in the article are mainly collected from a territory-wide telephone poll commissioned by the Hong Kong Federation of Youth Groups involving a random sample of more than 500 young people aged 15-34. The article closes with some points for discussion.
Keywords: youth, aging population, elderly dependency ratio, retirement protection, old age living expenditure
Universal Pension and its Implications to Financial Education - Raymond W. M. SO
Raymond W. M. SO
Dean, School of Business, Hang Seng Management College

【Abstract】Anyone can start a business, but will not succeed overnight; modern entrepreneurs cannot rely solely on luck, but need to understand their interests, personality traits, and the entrepreneurial resources and expertise they possess. Such an understanding will lead the entrepreneur to plan well for the next stages. The entrepreneurial path is full of challenges. Effort alone cannot guarantee you will be successful, but all successful people have worked hard. I explain in this paper the changes I made to ensure my business was competitive.
Keywords: entrepreneurship, strategy, business opportunities, market, competitiveness
New Business Creation for the Young Generation in Macao: Opportunities and Challenges - Jacky Fok Loi HONG Jian XU
Jacky Fok Loi HONG
Associate Professor, Faculty of Business Administration, University of Macau
Jian XU
MBA candidate, Faculty of Business Administration, University of Macau

【Abstract】Starting a new business venture is a popular ambition for many people. However, the economic structure of Macao has become increasingly dominated by the tourism and gaming industries, which provide both opportunities and challenges for local young people starting their own businesses.
Keywords: venture business, Macao, opportunities, challenges

【Abstract】In the 2013-14 school year, there were 25,384 non-Chinese-speaking children studying in public and directly subsidised primary and secondary schools. Educational policies for those pupils are set by the Hong Kong government so as to meet the needs of minority pupils. Because of the increase in the number of South Asian immigrants to Hong Kong, the retention of designated schools and the issue of whether non-Chinese-speaking pupils should learn Chinese has become a controversial issue in recent years. This article analyses the changes in education policies for non-Chinese-speaking pupils in Hong Kong, such as the issues arising in their education, the status of their education, and the rise and fall of Hong Kong designated schools. It also addresses aspects of learning Chinese from the perspective of non-Chinese-speaking pupils and identifies some other needs and challenges for minority in Hong Kong education.
Keywords: The Minority Education in Hong Kong, Educational Policies for Non-Chinese-Speaking Pupils, Education Equity of Hong Kong
Empowerment in Social Work Practice with Young People: The Case of Taiwan - Chung-yi HU
Chung-yi HU
Department of Social Work, National Taipei University

【Abstract】Memorial museums, an important branch of museums, play a significant role in social education, including cultivating patriotism and national spirit; shaping ideals, beliefs, and morality; and disseminating scientific and humanistic culture among all members of society, especially the young. It is urgent that such memorial museums learn how to curate knowledgeable, interesting, ideological, and educative themed exhibitions, aimed mainly at young students, so as to explore new forms of social education and create a new cultural education against the background of the booming development of museums in general. Developing a successful theme exhibition should follow the principles of subject, service, creation, complementation, retroaction, and timeliness. Meanwhile, a grand education system of triplicity, or the unity of family education, schooling, and social education, should be conscientiously established to adapt to the characteristics of the times and the principles of education. In this way, young students’ consciousness of the exhibition and museums in general can gradually form, allowing the connection between memorial museums and schools to be realized within a program of cultural education.
Keywords: memorial museums, theme exhibitions, social education, triplicity, cultural education